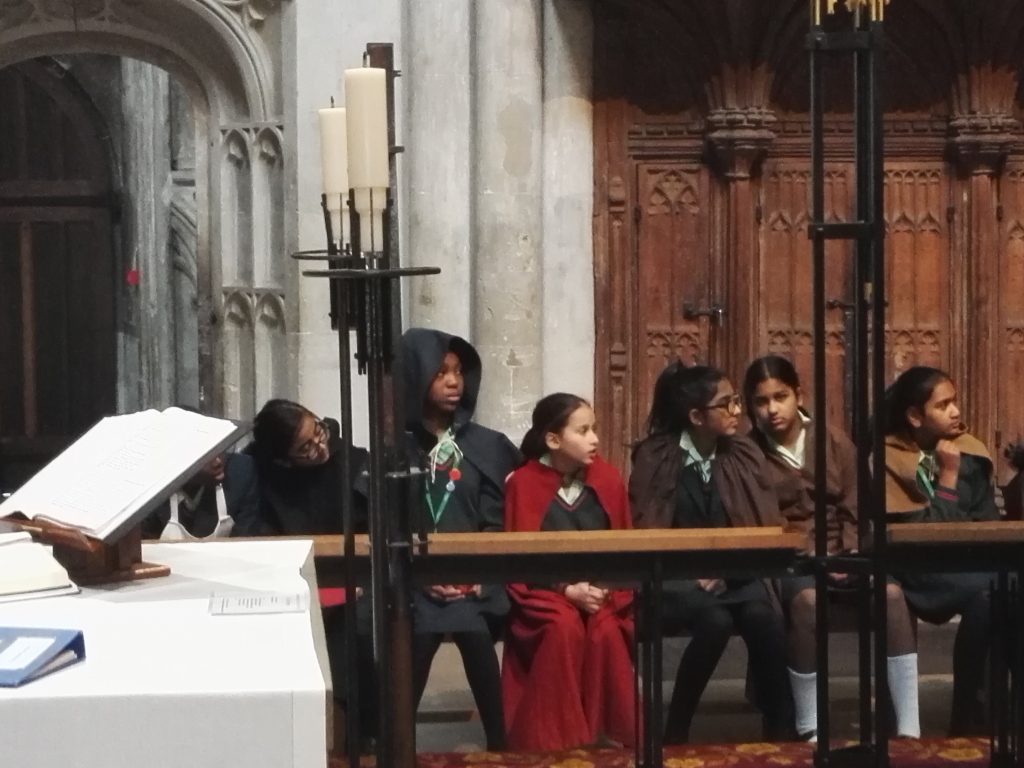 Natasha in L4 writes about her year’s recent trip to St Albans.

On 29 November, a very excited L4 boarded the coaches to St Albans Cathedral. With the prospect of taking our phones on a trip for the first time and visiting a Christmas Market, there were high hopes for this trip, and it did not disappoint.

When we reached the cathedral, selfies with the statues were in order as we split off into groups and began to explore the cathedral. We were amazed by the high stone ceiling and walkways, agreeing that they would probably be quite nerve-wracking to walk on.  After admiring the architecture, we moved on to do the tours; some groups did the pilgrimage tour and the others did the monk trail. As we walked around, it felt creepy at first to be walking on graves, but eventually we became accustomed to it since it really was almost impossible to go anywhere without stepping on one.

Our tour guides explained the story of St Alban to us, showing us the strength of St Alban’s belief in God and why he was made a saint.

Then the pilgrimage groups were told just how hard a pilgrimage could have been to make, helping us realise how desperate people were for help from God and St Alban and how much they believed in them.  Then it was our turn to make the pilgrimage and ask for help. Luckily we didn’t make a real pilgrimage as walking hundreds of miles would take several days, but we went out to the cathedral entrance and our journey commenced there. We walked solemnly through the cathedral (some of us still determinedly avoiding the graves on the floor) and finally knelt before the altar to make our offerings and ask for our blessings. There was a farmer who was giving thanks for his crops; a shepherdess begging for her dying sheep to be saved and her lambs to be born safely; a wealthy lady asking for her husband to be cured of disease; and many more people besides, from all walks of life; blacksmith to knight, farmer to maid, everybody wanted help from St Alban.

Meanwhile, the other groups were doing the monk trail. Monks were important; they tended to the cathedral and the abbey and kept them ready for all their guests and provided refreshments and accommodation for pilgrims. Each member of the group received a different job, ranging from a lowly fish pond keeper to an abbot, who needed to keep monks in line and could scold them for misbehaviour, as our abbot may have had to once or twice. Then they all learnt about the abbey and what each of their individual jobs were, and after everybody had gone round the cathedral and completed their individual tasks, they gathered together to tell the abbot how they had done in their jobs. Hopefully the abbot was satisfied!

Once everybody had completed their activities, we all went to have lunch outside the cathedral (although there was a bit of shivering) and then we were rewarded with a visit to the Christmas Market. After plenty of hot chocolate, chips, candy floss and chocolate, we walked round the edge of Verulamium Park and back to the coaches. We all agreed that we had chosen the scenic route rather than the warm one; there were plenty of numb fingers and toes by the time we reached the coaches.  As we headed home happily, we all agreed it had been a wonderful day.