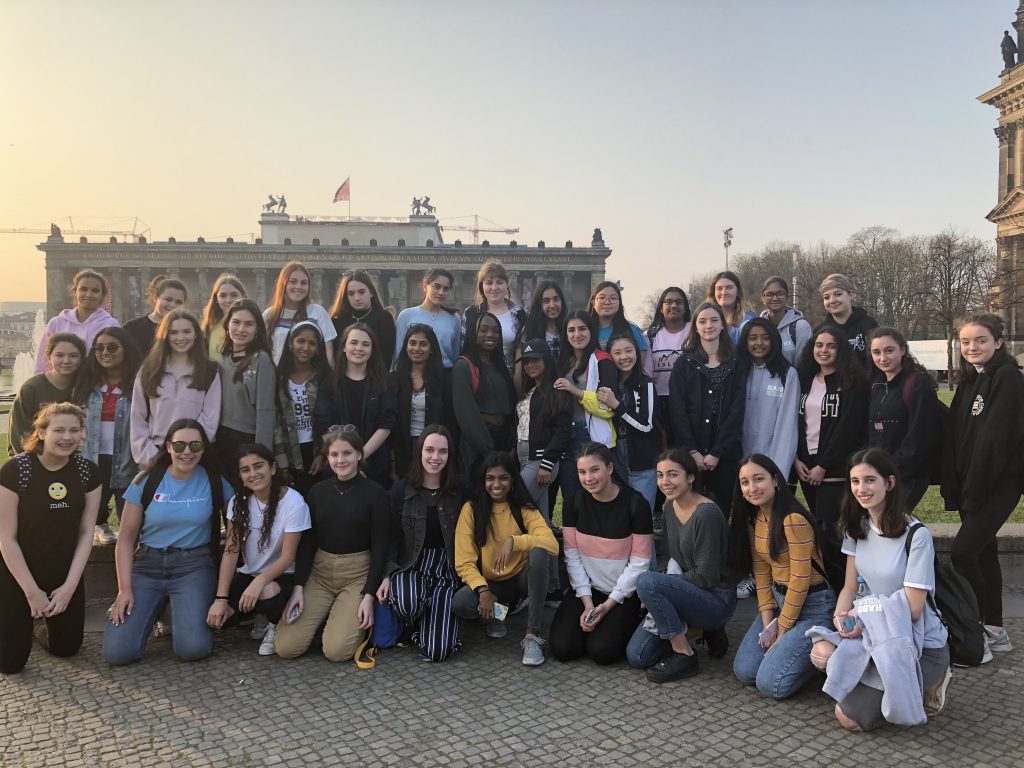 After an early start during the Easter holidays, a group of excited M5 girls arrived in Berlin for what proved to be an incredible trip. We had unseasonably great weather, so our walking tour of the city was really enjoyable and we saw some of the city’s historic landmarks – such as the Brandenburg Gate – as well as more recent installations like the Memorial to the Murdered Jews of Europe, which was designed as an experience to make viewers feel uncomfortable through sloping ground and different sized blocks, which some say resemble gravestones. In the evening, we were given a guided tour of the Reichstag (German parliament). It was interesting to see the main hall from the upstairs gallery, and the views from the terrace of the city at night were breath taking.

On the second day, we visited Sachsenhausen concentration camp, just outside of Berlin. For me, this was a real highlight of the trip as it was incredibly moving to see what remained of such a horrific series of events. It was extraordinarily humbling to not only stand inside the walls of a site we had all read about in textbooks, but to get just the beginning of a sense for the abhorrent conditions while it was in use. I know I will never forget entering through Tower A, with the bitter irony of the infamous phrase ‘work makes freedom’ carved out in cold, black lettering in the gate.

The Museum of the Topography of Terror, located where the Gestapo headquarters used to be had an interesting and moving exhibition of the architecture used in the Nazi regime to create fear. What stood out was the personal stories which will continue to remind visitors of how brutal the regime was. Next, the Jewish museum which was laid out in an X shape, with the history of Jewish people in Berlin on one axis and the history of the Holocaust on the other axis, with the dates matching where the axis crossed. Most strikingly, there were several areas of the museum that had been deliberately left empty to represent the missing Jews in German society. One of the most memorable spaces was called the memory void and used faces to represent the millions of innocent victims of World War 2.

After an afternoon of sunshine and ice cream at the zoo, we went to a diner and all enjoyed our burgers and (more) ice cream. For the final activity of the day we went up the Berlin tower with breath taking views.

The East Side Gallery is remaining piece of the Berlin Wall that has been painted with all different kinds of street art incorporating a mixture of all different arts from political statements to intricate designs. It was amazing to see such a prominent part of recent history made into such an interesting art exhibition. Overall we all had an amazing time – from moving historical sites and museums, to fun in zoos, malls and bowling alleys- the trip really captured modern and old Berlin as a whole.