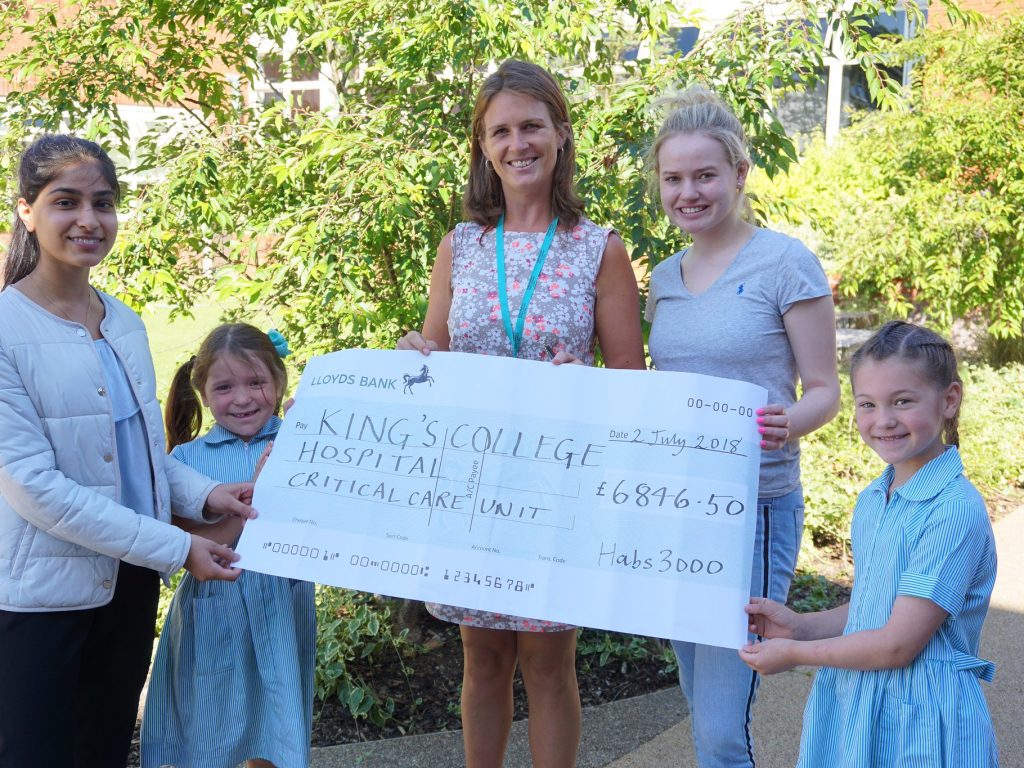 At the end of the Summer Term, Kiko Matthews (world-record holder, campaigner and focus of our Habs 3000 Miles Challenge Fundraising activities) returned to Habs after completing her world-record breaking solo row across the Atlantic. She delivered a wonderful whole school assembly, inspiring us all with her bravery and fortitude in the face of various challenges including Cushings Disease in recent years. We were delighted to be able to present her with a big cheque after all our efforts in in the Habs 3000 Miles Challenge. After she spoke to the school I was able to ask her few questions – about her experiences and what she took away from this great display of the strength of the human mind against the vast expanses of the Atlantic Ocean!

What were your main challenges and how did you overcome them?

So my main challenge was…..just the boringness of it – the boredom, the relentlessness, and just having to get yourself back out again…and the way you overcome that is if you don’t get back out there, it’s going to take longer, but you know like I said, I had a purpose which was to show people that you can do it and you can overcome anything, so that was really important, and exactly the same reason, but when I was, you know, knackered and just not wanting to get out and feeling guilty and all that stuff, and it was like ‘I’m doing this’ – so having that purpose that I had set up and sort of created really helped with overcoming that exhaustion, all those feelings of guilt…so that was definitely the hardest bit…apart from the sore bottom which I couldn’t really do anything about!

What was your lowest moment and what did you have to find in yourself to get through that?

So definitely, I remember trying to wake up and it just being absolutely exhausting, and then feeling guilty – it was really emotional – I felt so bad that my boat wasn’t moving and I wasn’t actually doing any rowing, and that people would be thinking ‘Oh my, that’s amazing, she got the record.’ Even though you obviously have to have rest, I kind of thought I should be rowing when I wasn’t rowing…I started to feel like a fraud! But, again, going back to why I was doing it, the money I was raising, the people I was inspiring (hopefully!) – one of the other schools did a 24 hour row before to be part of the project – I never even did a 24 hour row so that was pretty impressive! – they actually named one of their boats after me which is cool, and you guys doing your running challenge – all that is then what got me back on the oars and feeling good about it – and thinking about my mojito at the end as well!

You mentioned you now have a more simplistic lifestyle after reflecting on your experience, but what other things did you learn when you were out there, and how has this impacted your life?

That’s a very good question…I mean I’ve always been quite basic relative to (I think) this day and age – I don’t need a really extravagant lifestyle…but afterwards I really thought – ‘Okay I don’t need that so I’ll get rid of it and I don’t need that – actually I’ll be fine!’ – but one of the reasons I did it was because I felt that I had…I mean lots of people do these things and they come away saying ‘Oh my god – it’s so amazing – I’ve understood that you can’t control things in life!’ but actually I was taking that on to the boat in the first place – that mental state that I had already gained from life beforehand. I wanted to show people that actually you don’t need to have done anything amazing – all of that mental strength and ideas and stuff have just come from me looking at my experiences in everyday life and actually going – actually that was a bit rubbish – I can take that piece of wisdom from it…and realising that actually, you battle and you try and control things, and nothing happens, and you just waste energy and you feel rubbish about it…and then the next minute you go ‘Can I actually do anything about that? No – so why did I get so stressed about it?’ – so having that realisation which I then want to show to other people. So actually I don’t think I learnt a huge amount out there – I wanted to prove that just everyday life can make you strong enough to do something as extreme as that – you don’t have to be someone special!

Last question! Are you planning any future challenges?

Always! Someone asked me to do an ultra-marathon in the desert…I was like ‘okay!’ – I was like ‘I can’t run,’ and she said ‘But you crossed the Atlantic – you can do anything!’…I was like ‘Oh God…okay!’ – because that’s what I tell everybody, so I have to do that! I say that’s a little challenge, but it’s probably going to be harder than the Atlantic – it’s five days in Jordan. Then I’ve got my big one, which I’m hoping you guys will be a part of – cycling 6,700km around the coast doing beach cleans, but then creating this app which will help the public on land and around beaches change their behaviour, record their behaviour – plastic they collect – and bring that community together to create change. My principal goals are Challenge, Collaboration and Community – the global challenge is the plastic, the local challenge is, I suppose, the cycling, and actually if we work together as a community – that will be the app and everyone coming together and changing their behaviour – and actually if we support each other you can vote to where money is distributed to projects and charities which are doing great stuff that we as individuals might not have the means to do, but someone else is doing it – so our behaviour could actually result in money going to them – so that’s quite cool.