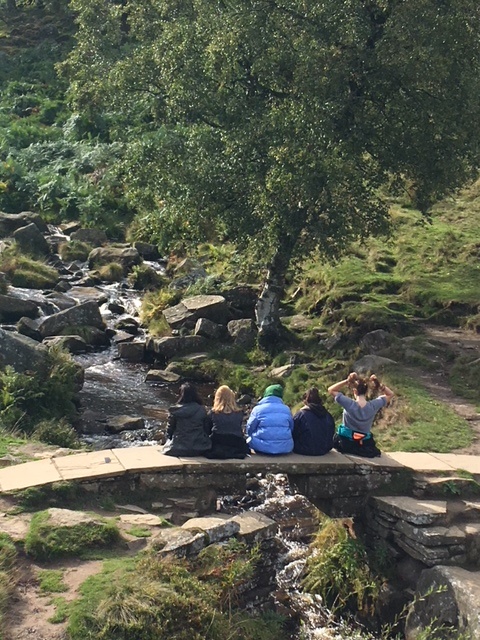 A Level trip to Haworth

Among the wet and windy moors of West Yorkshire, five intrepid Habs Girls and two courageous teachers spent an inspiring weekend in early September. Haworth, a chocolate-box perfect village, became the residence of the A-level Theatre Studies group for two days. The village was the home of the three Brontë sisters, and so we tried to immerse ourselves in their lives. In preparation for our A Level text, the play ‘Brontë’ by Polly Teale, we visited the sisters’ home. We were trying to gain an understanding of their background, and answer Teale’s question “How did it happen?”. This question forms the premise of the play, asking how it was possible for three Victorian spinsters to create such moving and timeless pieces of literature. We saw the table where so many great works were created, and were surprised by its lack of stature and strength. We hiked across the moors, the inspiration for Wuthering Heights, imagining Emily Brontë’s creations being conceived. We also rode the steam train which would have carried Anne Brontë away from her home for the last time. Naturally, we managed to find time for an afternoon tea in the beautiful vintage shops as well! The parsonage where the Brontës lived was opposite an imposing Gothic Church, and its Victorian graveyard provided a source of eerie exploration – and some petrified screams too!

On Saturday morning, after a hearty full-English breakfast, we spent a few hours digging into the play itself. Having seen first-hand the inspiration and birthplace of the Brontës’ books, we discovered a new level to the text. Never before have I felt so connected to a historical figure, nor understood a character so well. The weekend was a fantastic opportunity to discover more about the mighty women behind the novels. It left us all with an admiration for their successes and a desire to do them justice through the play.