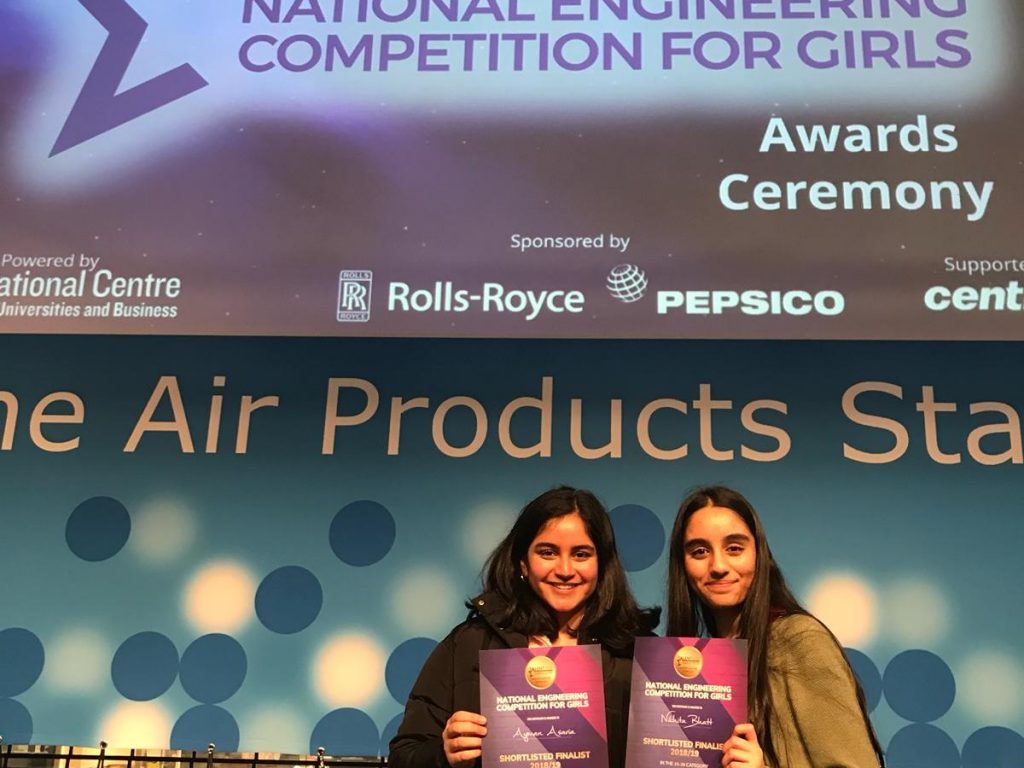 On Saturday 16 March, we headed off to Birmingham to spend an exciting day at the Big Bang Fair, where various science and engineering companies were to present and talk about their work with hundreds of students passionate about STEM. We were particularly nervous to present our own project which we had created as our shortlisted entry for the Talent 2030 National Engineering Competition as we had never spoken about our ideas to new people, especially experts in the field!

The fair was held at the National Exhibition Centre in Birmingham; the long train journey was definitely worth it though. In the morning we explored the Fair and spoke to a range of people about their jobs in science and engineering; it was so interesting to gain an insight into the world of working in STEM. The hall was packed with so many different stalls, ranging from the British Society of Immunology to GSK to the Royal Air Force. There was even an ambulance there – don’t worry no one was injured! We were fortunate enough to go inside it and experience a tiny fraction of what it’s like to be a paramedic. We then spent the afternoon presenting our idea to lots of people – even speaking to someone working in cancer research.

Our project combined biology, chemistry and physics by designing a solution to the problem of antibiotic resistance: a prevalent 21st century problem. It was quite difficult to combine ideas from what we had learnt at school with current research happening in the wider world, but when we were finished we were very proud of our entry. It was a great opportunity to have feedback from medics and scientists themselves and we learned so much about bio-engineering and how our project could be implemented in the real world. We both learnt a lot more about pathology, but were also able to see how seemingly different areas of science combine to solve problems. In addition, we learnt a lot about time management – balancing schoolwork and this project was definitely not easy and there were lots of strict deadlines to meet.

Overall it was an amazing experience and we would highly recommend entering the competition next year if you have an interest in STEM, because it was a valuable opportunity (and you can win money!). We would also like to say thank you to Mr Shopland for helping us throughout the project, and even coming up to Birmingham on Saturday.