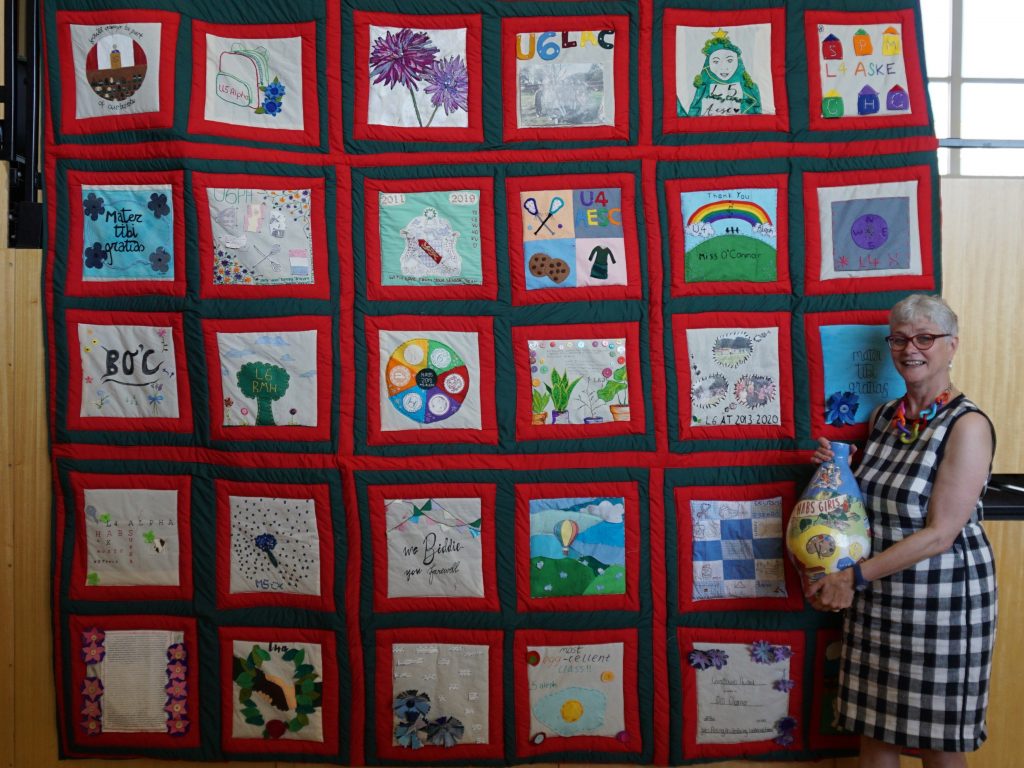 It has been an end of term of Goodbyes as we prepare for the departure of Headmistress Biddie O’Connor. Biddie’s association with the school stretches back to 1992 when she joined as Head of Classics before becoming Head of Sixth Form and Deputy Head. In 2001 she became Head at Loughborough High School before returning to Habs in 2011.

On Book Return Day, when we welcomed back our Upper 5 and Upper 6 students after their exams we enjoyed a special assembly at which a number of gifts were presented on behalf of the Senior School. All students had contributed to the production of a huge quilt that depicted many scenes from school life. Additionally students had created a beautifully painted vase in the style of one of Miss O’Connor’s favourite artists.

During the Year 6 Leavers’ Assembly, one of the students presented a book to which all pupils in the Junior School had contributed along with a framed collage of a cornflower (the school’s flower), which had been created using woollen pom poms.

At an event to say thank you to the St Catherine’s Parents’ Guild Committee a tree was given to the school in Miss O’Connor’s honour, which was unveiled in a special planting ceremony. The Headmistress thanked the Guild for their incredible fundraising efforts over the years and for their innovation in organising such a wide range of events that all raise valuable funds for the various school projects.

Miss O’Connor will be greatly missed but will forever be remembered as a Head that has presided over an incredibly exciting time in the history of Habs Girls School, during which time the school has gone from strength to strength, with students well-prepared for the demands of life after Elstree. We wish her all the very best for her own post-Elstree life and look forward, before too long, to welcoming her back to Habs.