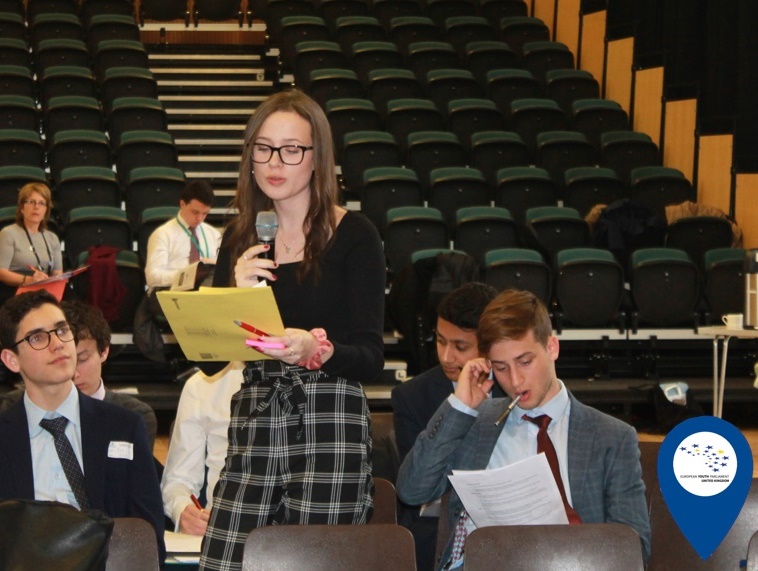 On Friday 1 March a group of politics students gathered in the Prevett Hall, to participate in the regional competition for the European Youth Parliament (EYP). After weeks of preparation, all sixteen Habs students felt ready to tackle the five resolutions – our main focus for the day. With eight students in the AFCO (Constitutional Affairs) committee and another eight in the CULT (Culture and Education) committee, there was certainly light-hearted competition in the air as Friday approached.

As soon as the open floor debate began on the starting resolution, all five committees vigorously raised their placards – and it remained like that for the rest of the day. We, as committees, had to devise arguments for each resolution as well as possible amendments that could be acknowledged by the proposing committee. The room was filled with heated debate as we covered prevalent political issues such as the sovereignty of Gibraltar, misinformation during elections and the dissemination of anti-Semitic beliefs.

As the day drew to a close, the hosts ended with a debate surrounding the deeply-concerning issue on whether pineapple has a place on pizza. A rather comical debate as students had to speak their native-tongue. From Russian to Italian we had an incomprehensible discourse.

It was a mentally-stimulating day; from ambiguous arguments supporting low voter turnouts to emotive speeches discussing the current state of our environment, we all enjoyed ourselves. We also learnt that AFCO would go through to Nationals, which will happen in Liverpool in June – something to look forward to!

All students left the Prevett Hall feeling more engaged with Politics on a global level, as well as more ably to publicly voice opinions on issues that our own government is struggling to approach themselves. It was a great opportunity to further develop our communication and teamwork skills.