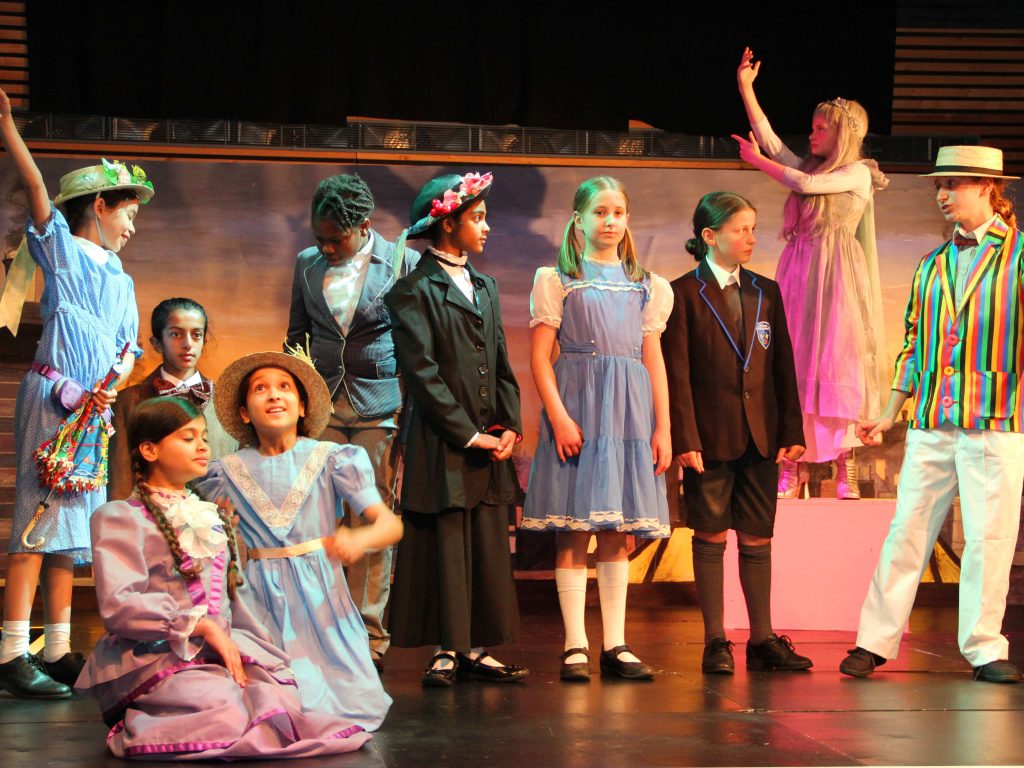 The Year 6 play this year was Mary Poppins Jr and our Performing Arts Prefects have written about their experience.  It’s super…..(you know the rest!)

Mary Poppins Jr was packed with songs and great fun!  During the rehearsal process, we focussed on developing our acting skills and on our speech. We enjoyed working with Mrs Whiteley on the choreography for the songs. The teachers were really helpful! Miss Galvin created the amazing backdrop and scenery. Mrs Gain collated around 50 props. Some of the props were made by us, and some were borrowed from Habs Boys’ School.  Mrs Galvin and Mrs Deamer worked together on the costumes which were superb and eye-catching. Mrs Galvin gave us some interesting facts about the costumes:

Although there were some brand new costumes made for this production, it was mainly a case of re-cycling, upcycling, lengthening, shortening, taking in, letting out or adding new bits.

We are lucky enough to have a huge wardrobe of past costumes for the Seniors and Juniors and we were able to use many skirts, dresses, jackets and trousers used in previous productions. For example, the bees, in a former life, were once Oompa Loompas in a 1995 production of Charlie and the Chocolate factory and the policeman and Mrs Brillʼs outfit have made an appearance in many productions starting with Wind in the Willows which was also in the 1990ʼs.

Miss Elliott and Mrs Flynn supported the cast backstage by helping us with our cues and keeping us calm. Mr Janes built the stage and controlled the light and sound with a Year 6 pupil. Mrs Rockley took some wonderful photographs during our rehearsals and performances.

Mrs Whiteley lived and breathed Mary Poppins and she helped us enjoy every moment. It was a journey that we will always remember; something none of us will be able to forget and we loved it so much and wish we could do it again, and again, and again.  We were so upset when our 3rd performance ended, and we wished we had another one but we realised that it was the end of our Year 6 play journey and we hope that other years coming after us will enjoy the experience as much as we did.

We were all so excited and so proud of our performances and we particularly really enjoyed working together as a whole year group.