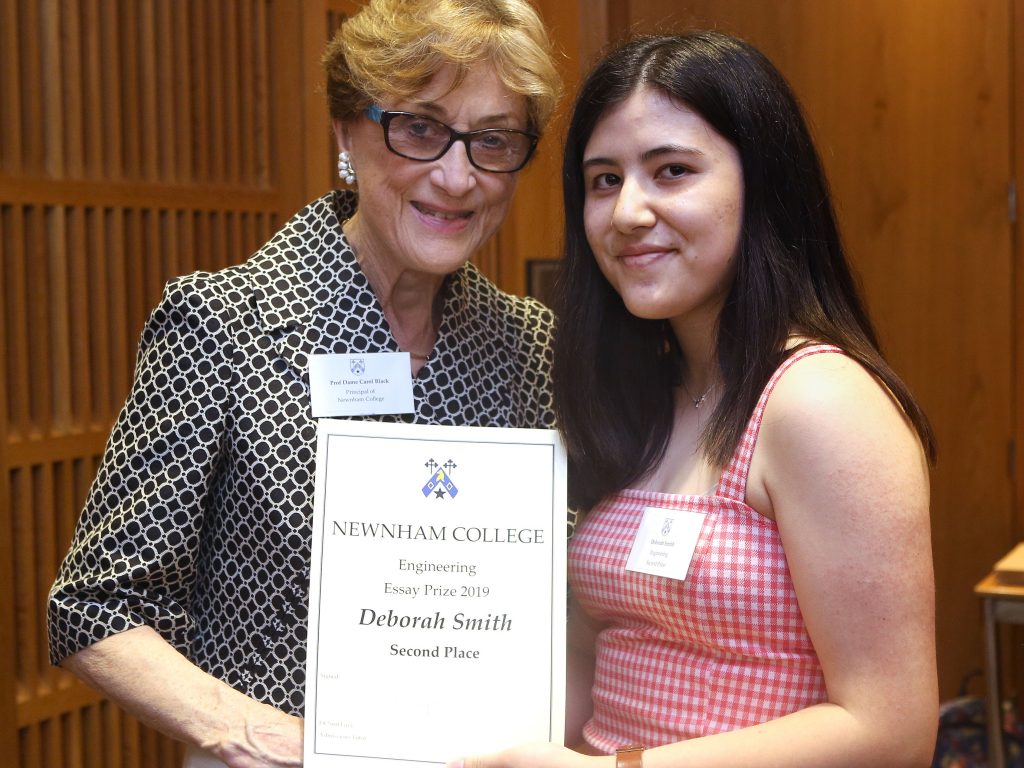 Congratulations to our sixth-former Deborah for winning one of the prestigious Newnham College essay prizes.  Deborah was awarded second prize in the Engineering category 2019.

Newnham College’s annual essay prize competitions are designed to encourage ambitious female sixth-form students to explore university-level subjects and themes and to develop their independent research and writing skills.  Newnham College is one of the University of Cambridge’s 31 colleges, and is well known for former students including Dame Emma Thompson, Professor Mary Beard, Nobel Prizewinner Dorothy Hodgkin and many more.

A record-breaking number of entries were received from a wide range of schools across ten different categories: Biological Sciences, Computer Science, Engineering, History, Modern and Medieval Languages, Music, Philosophy, Physical Sciences, Psychological & Behavioural Sciences and the Woolf Essay Prize, with questions inspired by Virginia Woolf’s A Room of One’s Own.  Virginia Woolf based A Room of One’s Own on a series of lectures she gave at Newnham in 1928.

Winners were selected by a panel of Newnham academics after hundreds of essays were received. Each competition has a prize of £400 for first place, £200 for second place, and £100 for third place.

All of the winners were invited to the women’s college at the heart of Cambridge University to take part in a special ceremony where they were presented with their prizes by Professor Dame Carol Black, Principal of Newnham College. The sixth-formers and their families then enjoyed afternoon tea and a chance to meet leading academics from all disciplines.

Dr Sam Lucy, Newnham Admissions Tutor, said “It is always inspiring to see the extremely high-quality work produced by the entrants to our Essay Prize competitions. All our prize-winners should be very proud of their achievement in a very competitive field. We hope that the academic freedom offered by the format confirms to them that the teaching on offer at Cambridge will suit them, and that they have the potential to thrive here if they go on to make an application, and hopefully consider Newnham if they do.”

Although it is not part of the admissions process at Newnham, several previous prize-winners are current students.